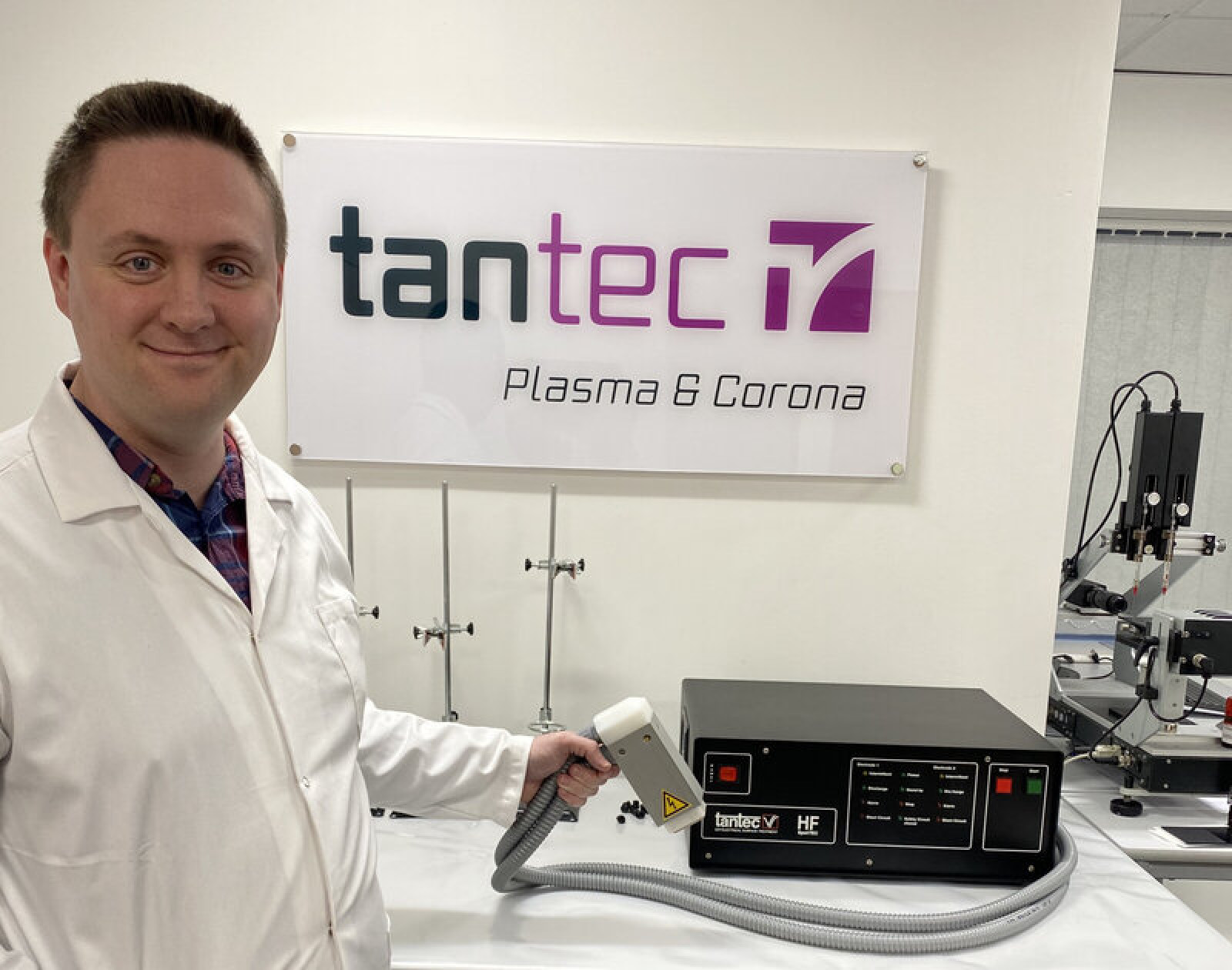 A leading surface adhesion company has transformed its approach to innovation after unlocking nearly £10,000 in government incentives for work that unexpectedly qualified as R&D, tax relief specialists and Made in the Midlands Patron Catax can reveal today.

Made in the Midlands member Tantec UK specialises in highly advanced plasma surface treatments that are used across the aviation, medical, automotive and electronics industries to bond materials together.

However, differences in the material composition, type of ink, adhesive and coating being applied mean that every solution is unique and has to be tailored to each client’s specific needs.

One project proved particularly challenging. In 2018 the firm, based in Redditch, near Birmingham, was asked to find a way of bonding automotive plastics to various components, including tapes, spray adhesive and leather. The company had to rely on a bespoke solution and was delighted when Catax’s experts unexpectedly identified activity that qualified under the HMRC R&D tax credit scheme resulting in a £9,412 tax benefit paid back to the firm as a lump sum.

Using an off-the-shelf solution may have worked, but specific materials, high volume throughput and a variety of technical requirements needed to be explored first. That involved sitting down with the customer to discuss these aspects before performing trials on the parts that were crucial to solving the problem.

There are normally two aspects to testing, starting with looking at the surface energy of a material before and after different amounts of treatment are applied using a range of techniques. Common plastic Polypropylene, for example, is hard to adhere to due to its low surface energy. In an attempt to find the correct solution, Tantec had to experiment with different treatment levels to ensure that the desired result could be achieved without exceeding deadlines that dovetailed with the timetables governing other elements in the production.

The size of components and the processing time informed by studies of surface energy are crucial in deciding whether standard machines can be used. A fast processing time, coupled with smaller components and generous production times might permit a standard machine to be used. However, larger parts requiring faster cycle times or specific tooling requirements would typically call for a custom solution. In those circumstances, Tantec designs and builds bespoke pieces of equipment that better suit the customer’s requirements.

A bespoke unit was ultimately needed for this customer, which included specific elements such as automated doors to reduce floor space, upgraded hardware to improve cycle time and a connected system for remote viewing and diagnosis in case problems arose. This was especially important to this customer, as it was a company that produced parts required by various automotive manufacturers and the firm would not want to be responsible for having to hold up the final assembly line.

Tantec UK is now eyeing future growth of the business, aided by the extra support it now knows will be provided in the form of R&D tax credits. They will prove especially valuable as Tantec expands into new areas to reduce its reliance on third-party suppliers.

R&D tax credits were introduced by the government in 2000 to incentivise innovation, and result in either a reduction in a limited company’s corporation tax bill or a cash lump sum.

Many firms don’t realise the work they do qualifies as R&D, which is defined as any work that seeks to resolve a scientific or technological uncertainty, whether that’s a new process, product or service, or an improvement to an existing one. Crucially, R&D work does not need to have been successful to qualify and claims can be made up to two years beyond the end of the tax year in which the work took place.

Chris Howey, who is Managing Director of Tantec UK as well as a chemistry graduate, commented:

“While we do sell standard systems, or repeat bespoke systems, nearly all first time enquiries require some degree of investigation. Whether it’s a different adhesive, material to bond or process to follow, no two problems are the same.

“We now realise this means some of our more advanced work qualifies as R&D under the tax credit scheme and it was a fantastic surprise to also learn that staff costs qualify too, as this is a significant overhead.

“Our first claim may not be huge but it has led to a renewed focus on future innovations, inspired largely by the knowledge that we can rely on this government support to help get us there. We will be seeking out more complex projects knowing that the scheme makes them much more worthwhile for us as a business, and we have plans to employ someone full time to really drive our R&D forward.”

“The overall size of this claim wasn’t as valuable to Tantec UK as the lessons it learned in how R&D tax credits can be applied. It’s no understatement to say that, now Chris and his team know they can benefit, it has transformed the company’s prospects and its approach to the most difficult projects.

“We couldn’t be happier that this claim is going to result in a massive expansion in the scope of their trailblazing work. This promises to have a huge impact on the cash flow and success of the business for years to come.”

Welcome to our microsite, please tell us your name, company and email to chat with a member of the team.